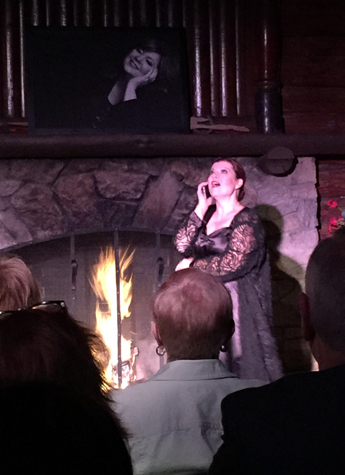 When Peggy Lee hit the national stage, she was doing something her male counterparts weren't: she was writing her own songs. Songstress Mary Carrick and her combo celebrate the great female songwriters of our time – icons who moved music forward, wrote from their own perspective, and whose work has paved the way for the next generation of artists. Mary features songs by Dolly Parton, Carole King, Joni Mitchell, Nina Simone, Peggy Lee, Janis Ian, Lady Antebellum, and Cyndi Lauper, along with a few lesser known artists you’ll want to listen to again and again. She brings her dynamic vocals, gift for storytelling, and her trio of musicians on piano, acoustic bass, and drums for an evening (or afternoon) that will take you back and leave you humming a familiar tune.k with her stellar trio performs music iconic female songwriters - women who paved the way in music - including Dolly Parton, Peggy Lee, Carole King, Joni Mitchell, and more.

Opera Omaha's Core Artists will perform a series of concerts across the Omaha metro during the spring and summer.

Performed in the ensemble and a featured quartet in this comedic Mozart opera.

A remount of the popular production from the previous season. Reprised the role of "Deb" in this fun and showstopping musical based on the movie, "Elf".

Performed a selection of Holiday music for this annual Opera Omaha event.

Performed the role of Cio-Cio San's Mother in this Jun Kaneko designed production.

Performed a duet for this special event as a precursor to the Jun Kaneko designed production of "Madama Butterfly".

Performed a set of songs for the International Convention of the P.E.O. Sisterhood.

Played the role of "Deb" in this fun and showstopping musical based on the movie, "Elf".

Guest vocalist for this free, community wide event featuring the Nebraska Wind Symphony (under the direction of Keith Davis) at the Holland Performing Arts Center. This wonderful and festive  concert on Thanksgiving evening followed the holiday lighting ceremony at Gene Leahy Mall in downtown Omaha.

INSIDE THE MIND OF THE ARTIST SERIES - OMAHA CONSERVATORY OF MUSIC: FEB. 10, 2018

"The Art of Story Song" featuring a musical exploration of story songs from various musical genres, including discussion and Q&A.

Performed the role of "Mother" in this classic holiday opera.

World premiere of this new opera commissioned by Opera Omaha, libretto by Kevin Lawler and composed by Nevada Jones.  The opera is an exploration of the love, life and work of the prophetic artist William Blake and his wife and collaborator, Catherine.  Performed the role of Old Catherine.

Performed the lead role of "Elle" in the Francis Poulenc one-woman opera in celebration of National Opera Week.  Performances were held at House of Loom and Fontenelle Forest in Omaha, NE with an additional performance for students at the University of Nebraska - Omaha.  Directed by James de Blasis and music direction by J. Gawf.

Guest soloist with the Nebraska Wind Symphony for the signature concert of the Holiday Lights Festival, a community celebration for the City of Omaha.

Featured vocalist for annual fundraiser for the Omaha Press Club.

other venues and engagements:

Mary Carrick is a professional cabaret singer, concert singer, and recording artist. Her debut album, Let’s Fly, was released in May 2014. Produced in conjunction with J. Gawf, the album features reimagined classics from the American Songbook, cabaret, country, folk, and more. Mary Carrick is active as a cabaret singer, actress, and special event vocalist in Omaha, Nebraska, where she is based, and throughout the Midwest. She is a touring artist with the Nebraska Arts Council (Nebraska Touring Program) and an arts educator. Mary is the recipient of the 2013 Omaha Entertainment & Arts Award (OEA) as Best Supporting Actress – Musical as well as the Theatre Arts Guild Award for Outstanding Cabaret (2008), Outstanding Lead Actress (2007), and Outstanding Featured Actress (2003).